As we have a social media presence, we do see a lot of “Misinformation” about oral hygiene for dogs and cats, example: Dry foods(Kibble) helps to clean dogs and cats teeth as it’s abrasive texture scrapes of plaque when they chew. If only i have a pound for every time i have heard that, even a penny! Well I would be considerable better off. Which is a crying shame when you think over 80% of dogs over the age of three have active dental disease.

So back to kibble cleans teeth, this simply couldn’t be further from the truth, if you told your Dentist that you’ve started to brush your teeth with biscuits because their abrasive texture will keep plaque at bay, what do you think their response would be? Try it, their face will be a picture to remember! Please ask, please send me pictures!!

Now can you see the illogical reasoning behind dry foods helping with oral hygiene?

This is just an example of the abundance of mis advice being shared online, but it’s not the general public’s fault, it’s usually something that gets started by a Vet/ Pet Food Brand and then shared around and sometimes even taken out of context.

The winning points for dry foods being great for oral hygiene are just two factors:

However, a study showed that these two methods score best on molars and such methods should be questioned in respect of the deciduous teeth and canine teeth because the results weren’t as conclusive for those.

They use this same additive in Cat foods too, although the study conducted was on Beagles, in addition there has been studies done in respect of the “Mechanical” shape of kibble pieces on Cats, which shown a reduction in plaque/tartar and gingivitis in the group that were fed larger kibble pieces without manual brushing. (Vrieling, H. E., Theyse, Et Al 2005)

This shows how the Pet Food Industry is aware of the importance of dental hygiene and tries to combat it by using specific shapes of kibble and additives.

So why is poor dental hygiene such a pandemic?

As you know most Dogs and Cats eat dry foods and when they do, food residues get left behind on their teeth even more so on the molars.

Have you ever eaten a biscuit then had to use your finger to unstick some residue?

It’s the same principal but dogs and cats don’t get that luxury of self removal so it gets left to fester and oral bacteria has an all you can eat buffet.

For example a bacteria called “Streptococcus Mutans” is able to metabolize any sugars in carbohydrate foods on the teeth (Sucrose being a clinical example, Touger-Decker, Loveren 2003) , as the bacteria metabolises them, they leave an acidic by-product which decays the teeth and gums this is why they’re labelled  “Cariogenic” bacterial strains nicknamed the “Caries Process”, although said to be rarer in dogs, Elliott DR, et al 2005  but studies were done 10+ years ago and in more recent years formulas and the use carbohydrates such as “Beet Pulp”(high levels of sucrose)  has increased, Beet pulp is a controversial additive for fibre in domestic pet foods but’s been widely used in horse and livestock feeds many years previous with the same level of controversy, some of the controversial options are that due to processing the “sugars have been nearly diminished” but that indicates they’re still present.

There has been further studies showing how starch in combination with sucrose can influence Streptococcus Mutans , they conclude: “The combination of starch and sucrose has profound effects not only on the composition and structure of the polysaccharide matrix but also on gene expression of S. mutans within biofilms, which may enhance the cariogenic potential of dental biofilms.” Duarte, S., Klein, Et Al, 2008

You may have noticed above that we said the diet is ever so important for puppies and kittens?

This is because this poor dental hygiene during growth and development especially in the first 6 months of life, by 6 -12 weeks of age their deciduous teeth and canine teeth erupt through and “Puppy/Kitten teeth” fall out, It’s worth noting that cats and dogs don’t have baby molars they have those for life, an important factor!

If they have a build-up of plaque/tartar at that age, when the teeth come through, the bacteria will have the perfect chance to move below the gumline and infect the root and gums, Gingivitis can then build below the gum line often resulting in the need for a “below the gum line clean” under general aesthesia (Dental Prophylaxis).

So if we don’t get it right during their initial start in life, we unknowingly set them up to fail and open ourselves to be hit with big vet bills further down the line, remember if your Dog or Cat has bad breath, it’s not normal and should not be accepted to be “Part of the species”.

This is why Raw Meaty Bones should be given as the most appropriate and healthiest way to maintain oral health in cats, dogs and even ferrets.

The benefits of Raw Meaty Bones are also covered by Londsdale (1992, 2001) in great detail, who cited Dr. Coles, President of the Australian Veterinary Dentist Society, in 1997 saying : Dogs should chew bones twice a week and Cats should chew chicken necks once a week to help prevent dental disease”.

In certain scenarios supplementation can be of a benefit, such as ProDen PlaqueOff®  This supplement is seaweed based and the seaweed contains a compound called Ascophyllum nodosum , this has been shown to reduce the formation of plaque/tartar(Gawor, Jank, Et Al 2018)  and this can be added to your dogs foods.

If your Dog or Cat has any staining already present then we also stock toothbrushes which may be of benefit, such as the Vets Best Triple Headed Toothbrush this could help to reduce staining over time.

If your Dog or Cat may be suffering from advanced dental disease you were unaware of until reading this then please go and see your Vet for their guidance.

Thank you for reading!

We hope to see you all soon. 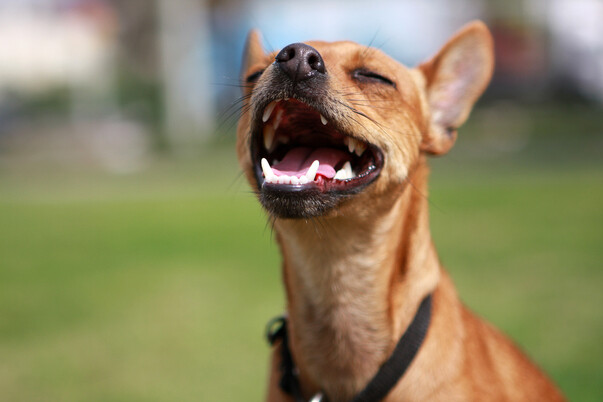